Voter Support for Federal Liberals Only 19% of Decided Voters in BC, and Majority (69%) Agree It’s Time for Change in Government

If a federal election were held tomorrow, the NDP would lead with 35% of decided voters in BC, 33% would vote Conservative, and only 19% support the Liberal party (8% Greens and 5% other parties)

Vancouver, BC — With less than two weeks left in the federal election race, Liberal support in BC has dropped due to declining perceptions of Prime Minister Trudeau; the majority of residents feel it’s time for a change in government.

If an election were held tomorrow, the Liberals would end up in third place in British Columbia according to our most recent poll. Among decided voters, the NDP party and the Conservative party are neck and neck in the election race with the NDP capturing 35% of the decided vote, followed by the Conservatives at 33%. The Liberals are much further down the list at 19%, while the Green Party would capture 8% of the decided vote and 5% would vote for an independent or another party. The NDP would capture the support of 48% of female voters and 45% of the 18-34 year old group, while the Conservative ballot would checked by 44% of males and 42% of the 55+ age group.

The Liberal vote in BC has eroded significantly since the last federal election just two short years ago, with only 61% of past Liberal voters saying they would mark the ballot the same in 2021 as in 2019. In contrast, the vast majority (87%) of NDP and Conservative (87%) voters will stick with the party they voted for in the last federal election. It is also worth noting that the Conservative vote is the most certain—75% of those supporting the Conservative party say their vote is ‘very certain’ compared to a much softer percentage for the Liberals (53%) and the NDP (56%).

Part of the deterioration of the Liberal’s fortunes must come from declining perceptions of Justin Trudeau as a leader among all British Columbians, and more importantly, among past Liberal voters. Only 33% of British Columbians approve of his performance as the Liberal leader (9% ‘strongly approve’, and 24% ‘somewhat approve’) compared to the much stronger 56% approval ratings of NDP leader Jagmeet Singh (24% ‘strongly approve’, 33% ‘somewhat approve’). Conservative party leader Erin O’Toole receives a 38% approval rating (14% ‘strongly approve’, 25% ‘somewhat approve’). It is telling that while the majority of past 2019 Liberal voters approve (72%) of Justin Trudeau’s performance, there is a significant minority who disapprove (28%). In contrast, 85% of past NDP voters approve of Jagmeet Singh’s performance and 83% of past Conservative voters approve of Erin O’Toole’s performance. 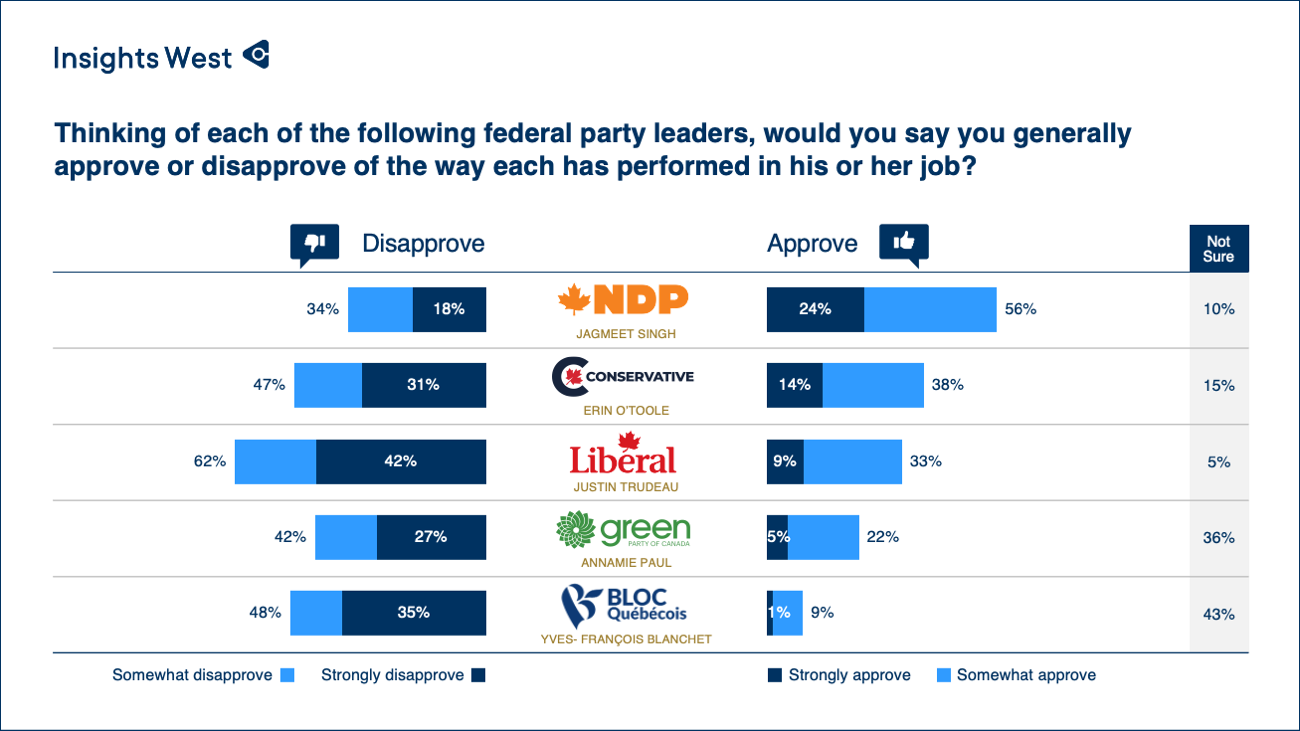 The decline of Trudeau’s popularity is precipitous, with 57% of British Columbians’ perceptions of Justin Trudeau having worsened in the last six months and only 5% having opinions that have improved (the opinions of 33% are the same and the final 5% are unsure). A significant proportion of those who voted Liberal in the last federal election (36%) indicate their opinion has worsened (17% improved, 46% the same, 1% not sure), and only 26% of those who planning to vote Liberal in 2021 say it has improved (63% the same, 9% worsened) and 1% not sure). British Columbians are more divided on how their opinions of Conservative leader O’Toole’s have changed, with 26% seeing improvement, 34% staying the same, and 30% having opinions that have worsened (the final 11% are unsure). Jagmeet Singh from the NDP has benefited the most during this campaign, as 29% have an improved opinion, 45% the same, and only 18% indicating their opinion of him has worsened (7% unsure).

“When the election was officially called, Trudeau was in an enviable position of leading the country with the largest share of intended voters, but more than halfway through the campaign it appears as though the final result is up in the air. Justin Trudeau and the Liberal’s lead in BC has evaporated due to his declining popularity here,” says Steve Mossop, President of Insights West. “One of the biggest predictors of an impending collapse of incumbent government is when the electorate feels that it is time for a change—and an overwhelming number of British Columbians feel that change is needed at a federal level. This could throw a wrench in Liberal plans to depend on Western voters to help Justin Trudeau achieve another Liberal victory. With the election less than two weeks away, it will be interesting to see how the final campaign unfolds and what voters will have to say on the final ballot.”

About Insights West:
Insights West is a full-service marketing research firm based in Western Canada. Since 2012, the company has conducted over one million surveys, executed 2,000 studies, and issued over 350 press releases on a variety of topics, correctly predicting the outcomes of 25 out of 26 elections and plebiscites. Insights West is a team of passionate, truth-seeking researchers who question everything to uncover the truth and what is emerging for a diverse set of clients. With an understanding of shifting markets, consumer and societal trends, and commitment to uncovering truths through a proprietary toolkit and innovative research approaches, Insights West helps organizations make better decisions.

About this Release:
Results are based on an online study conducted September 1 to 4, 2021 among a sample of 1,003 residents across BC. Respondents are part of Insights West’s Feedback Community, a panel of BC residents recruited from a variety of sources and backgrounds who share their views and opinions on an ongoing basis, and from other panels provided by partner providers. The margin of error with the total sample—which measures sample variability—is +/- 3.1 percentage points, 19 times out of 20. Discrepancies between totals are due to rounding. Click HERE to view the detailed data tabulations.

Nearly Six in Ten (58%) BC Residents Have Used the New Vaccine Card, 33% Experienced Instances Where Vaccine Cards Not Asked For When They Should Have Been